Whakatopu Kotahi and the Maori haka

Whakatopu Kotahi invaded the Loto-Québec stage with legs apart in menacing postures in their bamboo style skirts and little else. Stamping and shouting in rhythmic chants, staring goggle-eyed and waggling their tongues. This is something very different and exotic to see and the audience was spellbound at first; little children not quite knowing how to react to a performance larger than life and right in front of them. The haka is a traditional Maori dance or war cry that was originally performed by New Zealand’s native Maori people. They were originally performed before battles by warriors in a group as a show of strength and comradeship in order to intimidate their opponents. It is a dance where the members hold their posture, make rapid intimidating movements and gestures accompanied by stamping, cries and shouts. Haka were traditionally used for reasons other than war too: for welcoming distinguished visitors, special events, great achievements or funerals and even in schools. They eventually became famous in sports events particularly by the supporters and players of New Zealand’s rugby league team, the All Blacks. They are usually performed by men, but different varieties are performed by women and even children. 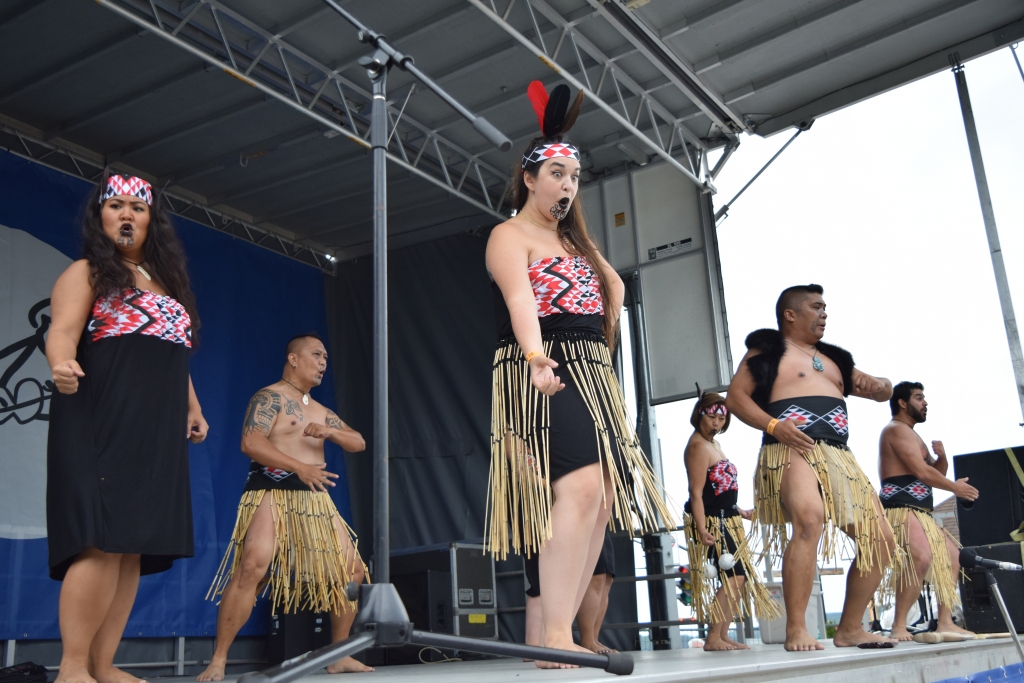 The name of the group Whakatopu Kotahi means “different elements coming together to achieve a common goal” like their dancers who come from different origins: Maori, Fiji, Samoa and the Philippines. The group is made up of both men and women wearing traditional Maori costumes and using Maori arms and instruments during the haka. The dancers are very generous in their performance, include the audience and explain the origins and meanings of the different dances. We were treated to ceremonial haka and integrity building haka which involves a father giving his son a lesson in life. He asks the child why he has so many problems and where he thinks they come from and teaches him that the solution to his problems are within himself and not outside. This is very different from the original war cry haka and by the end everyone is stamping and shouting and rolling their eyes, participating and experiencing Maori culture with the best of them.